Latest News:
19th February, 2023 - OCYM Youth Fest 29th January, 2023 - MGOCSM Yeldo Fest Condolence Message of H.G. Dr. Youhanon Mar Demetrios on the demise of Pope Emeritus Benedict XVI VII Dr. Paulos Mar Gregorios Award on YouTube/DocibMedia
Every good and perfect gift is from above, coming down from the Father of the heavenly lights, who does not change like shifting shadows. James 1:17 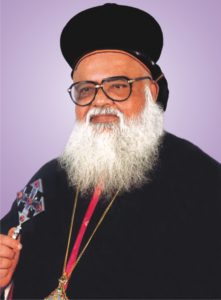 Late Lamented Job Mar Philoxenos, the more commonly acknowledged Thirumeni Appachan for the people of the churches of the Delhi Diocese was a man of divine insight, and a visionary and a beacon of love and compassion. A metropolitan who upheld and fulfilled the essence of what essentially his name meant, ‘Philoxenos’ i.e. lover of the strangers. He committed himself to the administrative requirements of Delhi Diocese, taking on its reins from the illustrious First Metropolitan of the Diocese H.G. Dr. Paulos Mar Gregorios, after the demise of the latter in 1996.

Under his able guidance, the Delhi Diocese strived at length for the upkeep of the motto of the Church at large and the aims outlined by his predecessor for the Diocese, braving through the multiple ailments he suffered from. His love for humanity can be seen reflected in the social activities he started in Shantigram, a hamlet of land near the Sohna Tehsil, in the state of Haryana. The life and work of Mar Philoxenos reflected the spirit of Mount Tabor Dayara, which emphasized the virtue of dedicating individual lives to an austere discipline, in a common effort toward prayerfully agreed social endeavors. He is remembered for his untiring efforts in striking up personal relationships with active members in each parish of the Orthodox Church, visiting all the Churches and congregations from Jaisalmer, a congregation in the Pakistan border, to UAE. His untiring support of fellow priests through difficult times has not gone unnoticed.

His most significant contribution was to make the memory of his predecessor H.G Paulos Mar Gregorios immortal by organizing the prestigious Dr. Paulos Mar Gregorios Memorial Award. The recipients of the award have been eminent national and international personalities including His Holiness Dalai Lama, social activist Baba Amte, Father of White revolution V. Kurien, Arya Vaidya Shala Kottakal founder P K. Warrier, and statesman Karan Singh. Giving wings to the dream of Late H.G. Paulos Mar Gregorios, he started construction of a Retreat Centre at Aravalli Hills in District Sohna, Haryana, which now is popularly known as Shanti Giri Ashram.

To realize his commitment to the community, he established the Shantigram Social Service Project in Mandavar for the development of a villages in Haryana (40 Km off Delhi). This project involved the purchase of 25 acres of land, the institution of a good English Medium School and an affordable Clinic to serve the people of the village. In his blessed memory, a self-help group for the womenfolk of Mandavar village was inaugurated by former Delhi Chief Minister Sheila Dikshit. The first medical mission of the Orthodox Church in the heart of the Capital was established at Aya Nagar on April 2, 2001 under Thirumeni’s leadership.

Thirumeni was a revolutionary in many aspects and this was evident from several decisions he took during his tenure. Thirumeni looked to the future and to include the future generations of Orthodox members he started a new spiritual organization called the Indian Orthodox Diaspora Secretariat (IODS), conducted conferences and meetings with an eye toward inclusiveness and ecumenism. His vision to cater to the needs of the outside Kerala youngsters and families led him to give shape to the Indian Orthodox Diaspora Movement, which later emerged as a full-fledged spiritual organization, besides the Sunday School, MGOCSM, Martha Mariam Samajam, AMOSS and Orthodox Christian Youth Movement. History was again created when Thirumeni brought women in the Church to the forefront giving approval for inducting young women of the Church into the Youth Movement. To encourage their participation in Sunday worship, Thirumeni issued an order allowing girls to read the Old Testament reading before the start of Qurbana. Thirumeni was ahead of his times in every sense. He was instrumental in opening the Internet as a means to connect to millions of Orthodox believers across the world in an attempt to clear their doubts on issues of faith, under his cheerful spirit and joyful face he always hid the pain and sorrow of his illness. Even in testing times, he conveyed his views on raging social and moral issues such as homosexuality, attack on Christians and need for world peace. Finally, through the melodious voice of Thirumeni we have been blessed to enjoy the sweetness and beauty of our worship. Perhaps, one can call H.G the real Vanampady of Orthodox Church.

The years His Grace dedicated to the Orthodox Church were filled with accomplishments reflecting his quiet commitment to the growth of the Church. He had consecrated over 16 new parishes in the Delhi Diocese, a majority being in the National Capital Region (NCR). It is worthy of mention here the tremendous amount of hard work and effort which went into acquiring the land through active negotiations with officials such as Governors and Ministers, the fund raising, planning and finally the monitoring of the construction that was required in the successful completion of these projects.

He spent his whole life for the spiritual and social development of the society. The dedication shown by His Grace, weaved with commitment had really brought new life for the growth of Orthodox Church. With no doubt we can say that the throughout the entire life Thirumeni would remain in the hearts of millions who had enjoyed the sweetness of his love.