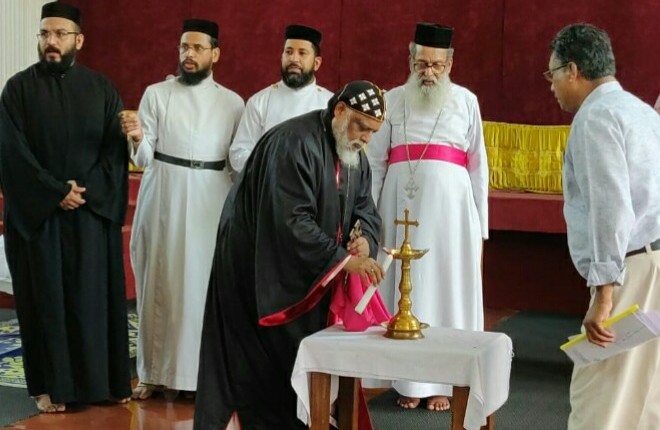 Every good and perfect gift is from above, coming down from the Father of the heavenly lights, who does not change like shifting shadows. James 1:17

The Diocese of Delhi was carved out of the outside Kerala Diocese of the Malankara Orthodox Syrian Church in the year 1975. The Diocese in the National Capital Region had been functioning as the backbone of the Church right from the time of its inception. The Diocese has been blessed in terms of the able leadership it has received time and again and the sincerity of its people, who living away from their homeland, have left no stone unturned in their pursuit of the growth of the Church in the regions where it was never been known.

The Diocese was first entrusted to the pioneering visionary and a world renowned scholar, the late lamented Dr. Paulos Mar Gregorios, of blessed memory, whose tireless and bold leadership was quintessential in leaving his imprint in the early stages of Church. The growth of the  Church,  especially in terms of the large number of parishes and institutions, had been the result of Mar Gregorios’ tireless efforts. At present what the Diocese  boasts of can be attributed to the great vision of the  late lamented Job Mar Philoxenos, the second Metropolitan of the Diocese of Delhi.

The Diocese of Delhi is amongst the thirty dioceses of the Malankara Orthodox Syrian  Church that spans both India and abroad. The Malankara Orthodox Syrian Church is an autocephalous, autonomous and indigenous church that belongs to the family of Oriental Orthodox churches. It traces its origin to the evangelical activity of St. Thomas, the Apostle of the Lord Jesus Christ in the 1st century (52 AD). The Church is headed by the Catholicos of the East and the Malankara Metropolitan; presently it is His Holiness Baselios Marthoma Paulose II. The Diocese of Delhi is under the spiritual and temporal authority of its current metropolitan, His Grace Dr. Youhanon Mar Demetrios.

The Diocese of Delhi

The headquarters of the Diocese of Delhi, more often known as the Delhi Diocesan Centre is situated at 2, Institutional Area, Tughlaqabad, New Delhi – 110 062. The Delhi Orthodox Diocesan Council is the society registered by the Delhi Diocese of the Malankara Orthodox Syrian Church in 1979 (Reg. No. 10502 of 1979) under the Societies Registration Act XXI of 1860 with the Registrar of Societies, Delhi. The primary objectives of the Council is to provide and administer the parishes, congregations, monasteries and convents, medical and educational institutions and cater to the welfare of humankind, especially for the upliftment of the poor and the downtrodden by means of various charitable and service-oriented endeavours.

The Orthodox Christians have been acknowledged worldwide as a faith community which is centred upon worship, study and service. The contributions rendered by the Church in the field of education, health care, missionary work has always been manifold in terms of leading to an overall upliftment and development of not just the Kerala Christian community but also for the people at large irrespective of the caste, creed, colour and language etc.

There are 25 educational institutions under the Council, which have acclaimed laurels and maintains their reputation not just for the quality education they impart but also in terms of their notable contributions to the nation. A special mention needs to be made regarding “Aanchal”, a centre for the differently abled children at Sector-3, Rohini, which is the embodiment of love in action.

The Diocese of Delhi in general and the Council in particular has been doing a commendable job in terms of striving hard towards the fulfilment of its goal of rendering a place of worship and communion for its members and also achieving the service motto of its society. The Society has been remarkable in terms of the marked contributions in the field of education, health care, village upliftment that it provides to the society at large through its educational institutions, rehabilitation centres, children’s home, old-age home, counselling centres and community development programs.

Mar Philoxenos Centre for Human and Social Development was set up as a consolidated organisation in memory of the late Metropolitan Job Mar Philoxenos who had initiated the developmental projects in Shantigram, Mandawar. Beginning with an integrated social development programme at Mandawar, Sohna Tehsil in Haryana, it is an ambitious project taken up by the Council. This project strives to work among the poor for the rural development of the surrounding village and is established in an area of 20 acres of land consisting of a CBSE affiliated school, a free medical dispensary and a bala bhavan. An old age home and rehabilitation centre have also been proposed for the future. Free health care camps and social awareness programmes are organised on a regular basis.

The Aravalli Retreat Centre can be seen as the conceptualisation of the long standing dream of the late Metropolitan Dr. Paulos Mar Gregorios, the first bishop of the Diocese of Delhi. This project houses a chapel and a retreat centre. The project responds to the increased depersonalization within the global society due to the stresses brought about by today’s living conditions and the resulting psychological consequences. The project endeavors to provide a secluded area for those seeking solace and tranquility, where people can experience a peaceful environment and attain realization of their inner selves.

The Gospel of St Luke portrays a group of shepherds, who were probably the first people to learn about the birth of a Savior and who visited the new born Baby at the manger and proclaimed the divine birth in public. St. Luke “carefully investigated everything from the beginning” (Luke 1:1-4) and reported in Chapter 2: 8-20 about the specially chosen shepherds who received the great message of universal importance,

“And there were shepherds living out in the fields nearby, keeping watch over their flocks at night. An angel of the Lord appeared to them, and the glory of the Lord shone around them, and they were terrified. But the angel said to them, “Do not be afraid. I bring you good news of great joy that will be for all the people. Today in the town of David a Savior has been born to you; he is Christ the Lord. This will be a sign to you: You will find a baby wrapped in cloths and lying in a manger.” Suddenly a great company of the heavenly host appeared with the angel, praising God and saying, “Glory to God in the highest, and on earth peace to men on whom his favor rests.” When the angels had left them and gone into heaven, the shepherds said to one another, “Let’s go to Bethlehem and see this thing that has happened, which the Lord has told us about.” So they hurried off and found Mary and Joseph, and the baby, who was lying in the manger. When they had seen him, they spread the word concerning what had been told them about this child, and all who heard it were amazed at what the shepherds said to them. But Mary treasured up all these things and pondered them in her heart. The shepherds returned, glorifying and praising God for all the things they had heard and seen, which were just as they had been told”.

I really wonder why the angels appeared to a group of unnamed shepherds at night outside a small village called Bethlehem to proclaim a message of universal importance.
Shepherds were poor people who watched over their flock, a job which lacked any sense of respect or dignity from the society. It was perceived to be the last resort for a jobless man. However, shepherds were tough, tough in every sense of the word. They had to stay up all night and all day in order to deal with troublesome animals, fight wolves, lions, and bears to protect his flock. Moreover, shepherds were intimidating. Bishop Craig Satterlee writes, “Society stereotyped shepherds as liars, degenerates, and thieves. The testimony of shepherds was not admissible in court, and many towns had ordinances barring shepherds from their city limits. The religious establishment took a particularly dim view of shepherds since the regular exercise of shepherds’ duties kept them from observing the Sabbath and rendered them ritually unclean. The Pharisees classed shepherds with tax collectors and prostitutes, persons who were “sinners” by virtue of their vocation.” Hence, they belonged to the lower ranks of the society.

But the question remains: Why shepherds?
One could argue that the conception and birth of Jesus Christ was the greatest event in history. God had become a human being, was born in Bethlehem, and was named Jesus. Yet, this good news was proclaimed by angels to these shepherds. If protocol demands, the news of this importance should have been told to the highest authorities in the region, not the world. It should have been announced by the angels to Caesar Augustus in Rome? or to the Roman Governor Quirinius or King Herod? Why didn’t they appear to the Jewish high priest at the Temple? Again the question remains, why shepherds?

The Mishnah, a collection of documents recording oral traditions governing the lives of Jewish people during the period of the Pharisees, considers the possibility that these were not shepherds of ordinary sheep. Alfred Edersheim (1825-1889) provides a fascinating answer to our question in his book’ The Life and Times of Jesus the Messiah. Writing about these shepherds, Edersheim referenced the Jewish Mishnah. One regulation in the Mishnah “expressly forbids the keeping of flocks throughout the land of Israel, except in the wildernesses – and the only flocks otherwise kept, would be those for the Temple-services” .Jerusalem and Bethlehem, and their surrounding fields were not in the wilderness where ordinary flocks of sheep were kept. Therefore, according to the Jewish regulations, the flocks under the care of the shepherds near Bethlehem must have been “for the Temple-services.” These shepherds watched over sheep destined as sacrifices in the Temple at Jerusalem.

Here lay the significance of the Shepherds of Bethlehem. If the flocks of sheeps are kept for the temple services; the shepherds watching over it are also specially chosen for the purpose and not like the nomadic ordinary shepherds of Bethlehem. Edershime wrote, “…everything points to these shepherds watching over sheep used for sacrifice. What would they have thought when they heard: ‘Today in the town of David a Savior has been born to you; he is Christ the Lord’ ” (2:11). The message of the angels signified, among other things, that the time of animal sacrifices would soon end. The offering of Jesus Christ, the Savior would soon take place. It is no wonder that these shepherds “glorifying and praising God for everything they had heard and seen”. This clearly resonates with the celebratory spirit of Christmas, a traditional time for celebrating the birth of Jesus Christ. Let’s remember why he came – not only to live but also to die – the perfect sacrifice for sin, once and for all.

Like the Shepherds of significance, we all are specially chosen for God’s purposes and are dignified enough to hear the good news from God and to proclaim to the world. As the chosen shepherds heard the good news and travelled far to see the incarnated God, let us also set for a search in our life to see the divine Child. Let us hurry and join the shepherds saying:
“Glory to God in the highest, and on earth peace to men and women, on whom his favor rests”. 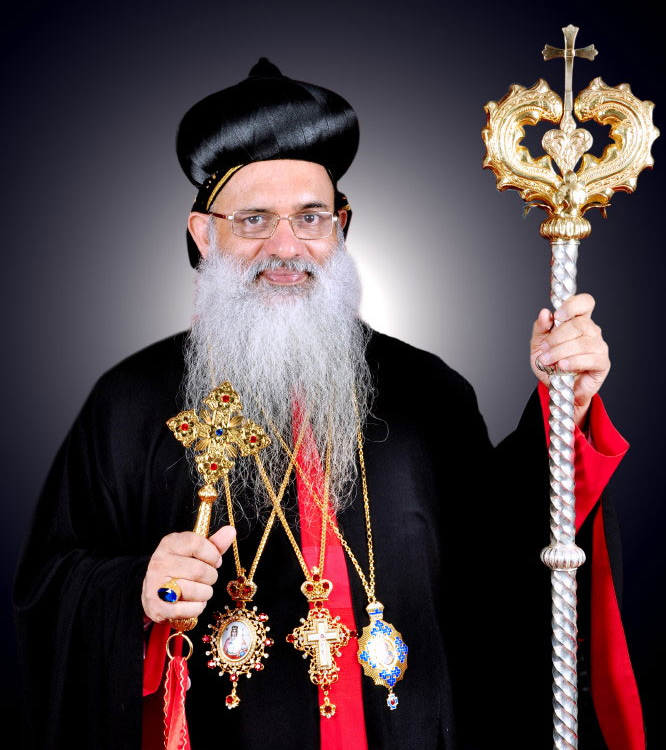